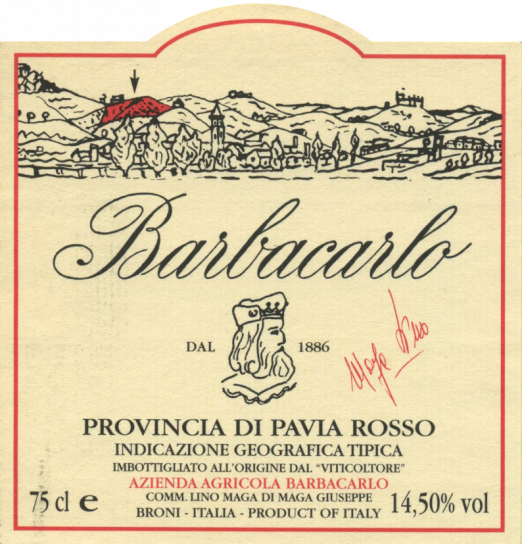 When it comes to fantastic distillati, few in Italy do it better than Vittorio Capovilla. Since the mid eighties he has been crafting exquisite grappa from Villa Dolfin Boldù in Rosà, right near the drink’s spiritual home in the Veneto’s Bassano del Grappa. This captures the essence of Barbacarlo, offering rich fruit, earth and a hint of briny minerals. A real treat at the end of a good meal.

Commendatore Lino Maga’s family has been making wine since 1886. Their vineyards cling to a very steep slope surrounded by forest in the hills outside Broni, Oltrepò Pavese. Some 300 metres above sea level, the four hectares of vines, on average 50 years old, are planted over tufo and exposed southwest, basking all day in light. It is a site worth fighting for and Lino spent 23 years doing just that, waging a legal battle against the authorities to ensure this monopole his family had tended for so long was recognised as their own.

Vineyard work is decidedly old school, the Maga’s work by hand, avoiding the use of chemicals and come harvest time make a rigorous selection of grapes. The wines are made the same way they always have been here. They are wild fermented in ancient casks with no temperature control, racked with the turn of the moon and bottled with nothing added in the spring. Unusually, the wines finish fermentation here, resulting in bottles that differ markedly from year to year, something Lino rejoices in, wondering why others bother to put the vintage on the label when the wines always taste the same.

To taste these wines is to be transported to another time. Sometimes rustic, often beautiful and with an honesty, transparency and charm that is difficult to find.