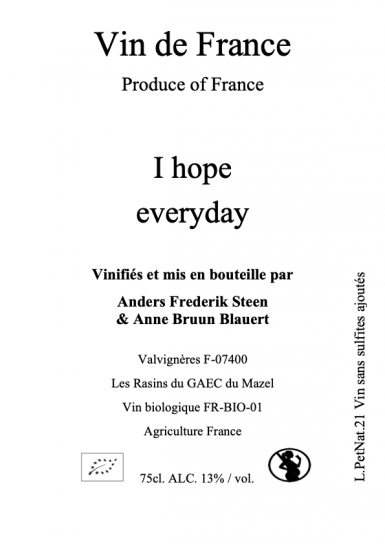 This beautiful sparkling rosé is a petillant naturel made from a direct press of Syrah, Merlot, Cabernet Sauvignon and Grenache from Le Mazel in Valvignères. It began fermentation in cuve, before being transferred to bottle to finish fermentation. The wine was disgorged just a few months later and the result is a pale, fragrant wine with gentle bubbles that carry a raft of raspberries and blood orange bitters.

The couple and their young family have now settled in the beautiful village of Valvignères in the Ardèche, a beautiful spot amidst a wide, open valley. The many varieties grown here thrive on a perfect mix of clay and limestone and the vineyards are full of life, having been tended organically for decades. As well as their own vineyards, the two also harvest grapes with the Ousrics in Valvignères and further afield with the Bannwarth family in Obermorschwihr, Alsace.

In his previous life Anders was both a chef and sommelier, working at the best restaurants in his native Denmark. This experience informs the couple’s winemaking in that they do not seek to follow rules or conventions and do not feel the need to do the same thing every year. Instead, as they harvest, they taste the grapes and begin to imagine the kind of wine they might be able to make.

This refreshingly free, creative approach yields wines that are truly one of a kind.