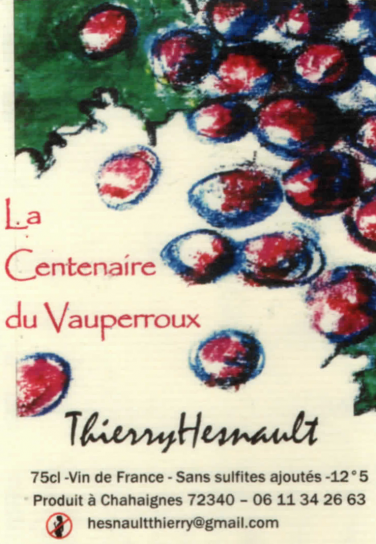 Thierry’s iconic Pineau d’Aunis comes from a hundred and thirty year old parcel planted on original roots. The grapes were fermented on the skins for three weeks and aged in old barrels for eighteen months. This warmer vintage has produced a deeper expression of site. Compact and elegant, it is defined by dark, brambly fruit, exotic spice and a complex, woodsy character that adds layers of intrigue. Remarkable now, this will truly reward those who wait.

After a surreal, dreamlike visit that was to be one of our last before the pandemic hit, we are very happy to be able to share a handful of wines from one of the Loire’s most discreet vignerons, Thierry Hesnault.

On a particularly drab January night we met Thierry at the little church in the village of Chahaignes and followed him through a number of lanes into the woods, arriving at the entrance to a small cave. Candles were lit and we stepped out of the rain and into the tuffeau, spending the next few hours tasting his subtle, moving wines, which verged on the sublime.

A native of Touraine, Thierry comes from a family of vignerons and travelled the world working in vineyards before returning to the Loire and working alongside the likes of Eric Nicolas and Jean-Pierre Robinot, whilst teaching at the Lycée Viticole in Amboise. He spent several years acquiring tiny parcels of the oldest vines he could find and in 2009 began making his own wine.

He now farms two and half hectares of old vines spread out in tiny parcels across the Sarthe, planted over a complex melange of clay, iron and silex. Having grown up amongst the vines, he farms with a real respect for nature, with treatments kept to an absolute minimum and a focus on channelling the energy of these remarkable old plants.

In the cave, Thierry makes wine as they did in yesteryear, without electricity or running water, relying on a deft hand, great patience and the perfect conditions for élevage the tuffeau provides to produce achingly pure wines that possess a remarkable capacity to age.