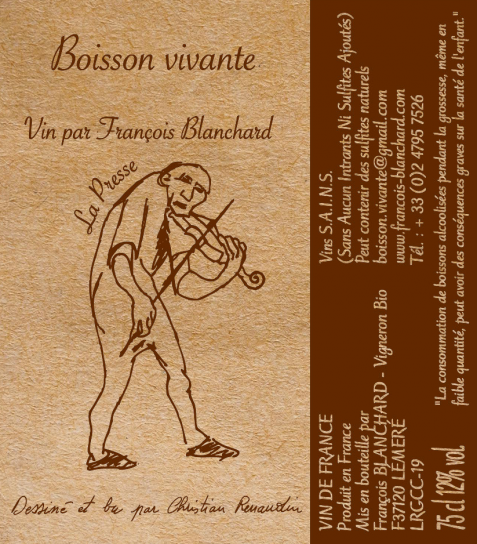 A blend of equal parts of Cabernets Sauvignon and Franc from fifty year old vines planted over clay and silex in La Grand-Cléré. The grapes fermented together as whole bunches for a month, before a year of rest in cuve. Showing plenty of old vines complexity, the generosity of fruit is framed by firm tannins and vibrant acidity, suggesting a long life ahead.

François Blanchard is the fifth generation of his family to have tended the vineyards of the Château du Perron in Lémeré, and the rich sense of history, culture and energy transmitted through his warmth and generosity is a joy to behold.

Music was his first love and after touring France as a jazz musician, François’s first real vintage was in 2003, though he has been immersed in wine his entire life and describes working in the vineyards as something that gives him a sense of peace and liberty.

He farms a total of four hectares of vines, whilst the other twenty hectares of land are wild, planted with vegetables and fruit trees and home to his two horses.

Three hectares are in La Grand-Cléré, a remote parcel hidden away amongst woods just a short drive from the home. Here, fifty year old vines grow over firm clay littered with silex and have been farmed organically for over two decades, with the focus now on natural permaculture, with great biodiversity on display. Just under a decade ago he planted Parc du Perron, a further hectare of vines over clay, limestone and Aeolian sands that sits right behind the Château.

In the cellar, François does not feel bound to the history of winemaking here and is openly creative and forever learning. The wines are fermented and aged in a variety of vessels and decisions are made intuitively, based on the fruits of the harvest and lessons learned.

The raw energy of the wines is matched by their density of fruit and layers of complexity. They reveal their nuance slowly over time, truly rewarding those who wait.

François’ passions extend well beyond wine, be it playing music, practising Aikido, baking bread or brewing his organic lambic beer, which is as nourishing and delicious a drink as you’ll find.