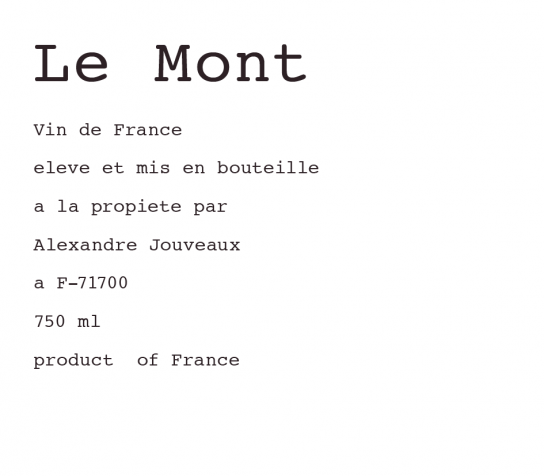 Chardonnay from less than a hectare of sixty year old vines planted over clay and limestone in Uchizy. The grapes were pressed directly and aged for a year in large foudres. This pairs ripe stone fruits, hazy minerals and a touch of spice to incredible effect. Already immense, it has the kind of stature, power and poise that suggest it will age gracefully for many years to come.

Over the past two decades Alexandre Jouveaux has made himself a name for producing thrillingly unique expressions of Chardonnay from a tiny cellar in the Mâconnais.

Alexandre’s story is well known. In the mid nineties he left his job as a successful fashion photographer in Paris with the dream of settling in the countryside and making the kind of wines he liked to drink. A sulphite allergy meant that most Burgundy was off limits to him and he has bottled his wines without additives from his first vintage at the turn of the millennium.

He lives with his wife Maryse Chatelin of Domaine des Fauvettes in the village of Uchizy and now farms two and half hectares of old vineyards spread across tiny parcels both near the village and elsewhere in Mâcon. Alexandre prefers to work in remote parcels surrounded by forest and focuses on retaining as diverse an ecosystem as possible amongst the vines. The soils are predominantly limestone, which lends the wines their hallmark notes of citrus and stones.

In the cellar, he exercises a deft hand and great patience. The grapes are pressed directly to old foudres where the wines remain untouched, resting on their lees until he deems them ready. When the time comes they are bottled by gravity, directly from the casks.

In their youth his chiseled, crystalline expressions of Chardonnay possess an incredible amount of energy, manifested in remarkable drive and a long, lingering line of acidity. Intensely mineral, these are true vins de garde that reward the patient and are best enjoyed after some time to rest in the cellar, slowly and over several hours.

Alexandre produces just a few thousand bottles a year and often just a barrel or two of each cuvée. We are extremely grateful to be able to share his work with you.