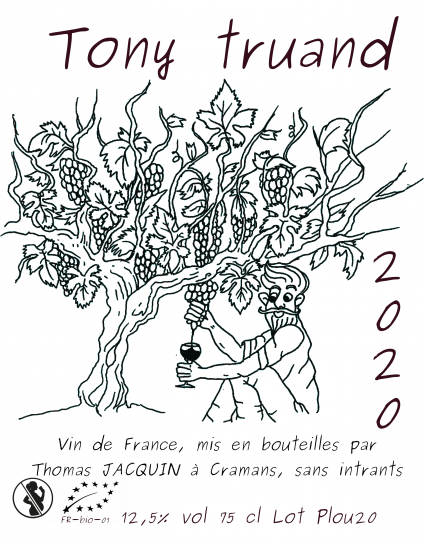 From twenty year old vines planted over marl and exposed west in the Arbois lieu-dit of ‘En Chamblin’. The grapes were destemmed by hand and macerated gently for a month before being pressed off with an old vertical press for a year of rest. Portraying the vintage, this shows the grape in a more serious guise. Embodied with a little more flesh, colour and depth than one might expect, it pairs crushed red berries, earth and a gentle funk to beautiful effect.

We are happy to be working alongside another of the Jura’s next generation, Thomas Jacquin.

Having completed his winemaking studies in Burgundy, Thomas spent half a decade under the tutelage of one of the Jura’s most learned vignerons in Stéphane Tissot, before acquiring a tiny plot in Arbois in 2017 and beginning his own project.

Thomas farms just under a hectare of Poulsard, Savagnin and medicinal plants in the lieu-dit of ‘En Chamblin’. The vines face west, a real boon in the age of climate change, and are planted over Triassic marl, which lends structure and depth to his wines. He farms biodynamically, using infusions from the plants grown in the vineyard to give the vines the strength they need to survive the increasingly unpredictable Jurassic weather.

In his tiny chai and cave in the village of Marnoz, Thomas works with little equipment and a simple, no nonsense approach to produce decidedly old fashioned, soulful wines in a style that suggests they possess a great capacity to age.